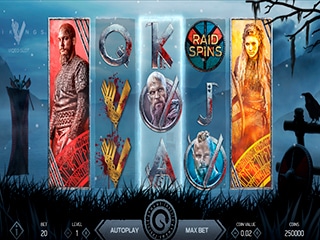 Vikings is a high-variance video slot released by the famous NetEnt in 2018. This game is based on the popular HBO TV series. It gives slot players the opportunity to join the rampaging raiders for a chance to win great prizes. Vikings features 5 reels, 3 rows, and 243 ways to win. However, this setup can change to 7 reels, 5 rows, and 78,125 ways to win during gameplay! The game’s theoretical payout rate is 96.05%.

The graphics look great with the Norwegian fields, a black crow, and weapons in the background. On the reels, you’ll come across Bjorn, Lagertha, Ragnar Lothbrok, Floki, the Raid Spins symbol, playing cards (A, K, Q, J and 10), and the “V” or Viking symbol (the most rewarding symbol).

Special features in the Vikings Slot include:

You need a desktop, smartphone or tablet to spin the reels of Vikings. Before you press “Spin”, choose from 1 to 10 levels using the “Level” +/- buttons and choose coin denominations from 0.01 to 0.50 using the “Coin Value” buttons. The “Max Bet” button is used to set the highest possible bet while the “Autoplay” feature is used to set automatic spins.

NetEnt’s Vikings is a great slot game with nice graphics and fascinating features. It’s a high volatility slot, so you can win huge prizes. Play it now!

We use cookies to ensure that we give you the best experience on our website. If you continue to use this site we will assume that you are happy with it.Ok