Emperor of The Sea 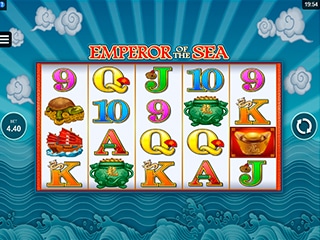 Emperor of The Sea Features

Emperor of The Sea Basics

Microgaming’s Emperor of the Sea video slot takes you to the sea for a chance to amass wealth. This Asian-themed game brings China’s maritime culture to live with incredible riches, mythical creatures, and beautiful artefacts. Emperor of the Sea features 5 reels and you can play with 38, 68 or 88 paylines. The key attractions include Stacked Wilds, Growing Wilds, Free Spins, and Rolling Reels. The game has an average payout percentage of around 96%.

Emperor of the Sea is a simple slot game featuring cartoonish graphics. The background features the sea and a beautiful Chinese soundtrack plays as you spin the reels. Symbols that appear on the reels during gameplay include dragons, koi carp, ships, coin pots, a tortoise relaxing on gold coins, and playing cards from 9 to Ace. The game’s Wild symbol is the Emperor of the Sea logo while the Scatter is represented by the golden ingot symbol.

Special features in the Emperor of the Sea slot include:

How to Spin the Reels of Emperor of the Sea

Are you ready to search for riches in the Dragon Emperor’s Kingdom? Well, load the game and open the “Bet” menu. Select coin denominations from 0.01 to 0.05 using the “Coin Size” +/- buttons and choose from 1 to 10 coins using the “Coins” +/- buttons. Use the “Lines” +/- buttons to choose between 38, 68 and 88 paylines. Hit “Spin” to play once or activate “Autoplay” to spin several rounds uninterrupted. Use the “Max Bet” feature to place the maximum bet.

Emperor of the Sea is a simple, Asian-themed slot with great features to increase your winning chances. Spin it for a chance to win up to 82,500 coins.

We use cookies to ensure that we give you the best experience on our website. If you continue to use this site we will assume that you are happy with it.Ok